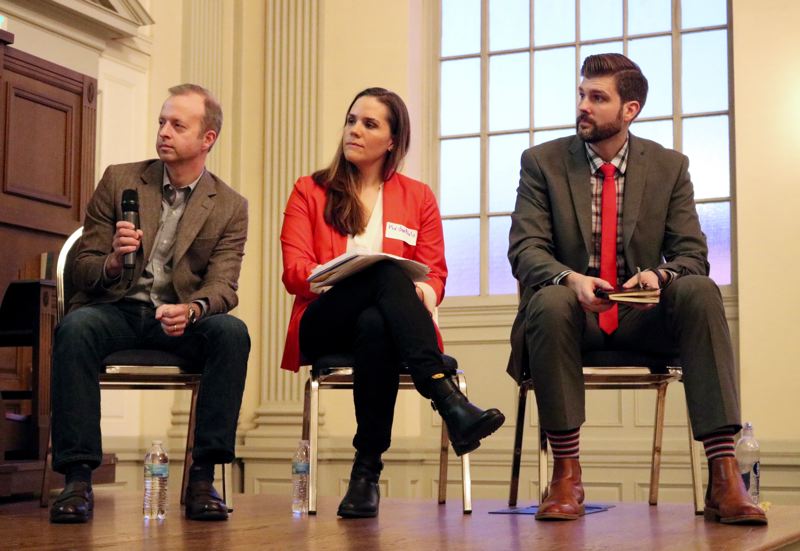 The most important local political office you know nothing about is coming into focus.

The successor to be voted on during the May primary will decide who gets a plea deal, will influence who gets bail — and even whether a suspect is charged with a crime at all. For instance, after a police shooting, the D.A. controls the narrative presented to a grand jury of citizens, who then decide if the authorities’ use of force was lawful.

The moderators pressed contenders to answer yes-or-no to a number of hot-button topics.

Here’s what you need to know as the race begins to take shape:

Experience: Employed as a federal prosecutor for the U.S. District of Oregon, he previously spent about a decade as a Multnomah County deputy district attorney.

Quote of the night: “If I disagree with the police union, I don’t have a problem with that. I’ll do what’s right.”

Decriminalize sex work? “It’s something I would think about,” he says, but worries sex traffickers might exploit legal loopholes.

Leave the Oregon District Attorneys Association? No. “You don’t leave if you want to change what they do,” he says.

Repeal Measure 11 mandatory minimum sentences? No, saying they are appropriate for violent crimes such as first-degree rape or robbery.

Experience: Currently an assistant attorney general for the Oregon Department of Justice, she previously worked as a criminal defense attorney and as a Deschutes County deputy district attorney.

Big idea: Pledges to release her own conclusions, not just voluminous transcripts from grand juries, and to impanel a special grand jury to investigate grand jury procedures.

Quote of the night: “Doctors take an oath to do no harm, and … I think that prosecutors should take a similar oath.”

Eliminate cash bail? No. Says bail should be reserved for the most “serious and most violent offenders.”

Decriminalize sex work? No, but “I wish that I could say yes.” Says she wants to know more.

Leave the Oregon District Attorneys Association? Yes. “The way in which they have stood in the way of reform is really frustrating,” she says.

Repeal Measure 11 mandatory minimum sentences? No, but says the charges are only appropriate for very serious crimes.

Experience: Director of the state’s oversight and planning group for public safety, the Oregon Criminal Justice Commission, he previously worked as a Multnomah County prosecutor.

Big ideas: Calls for third-party investigations of officer-involved shootings, the creation of a community oversight committee and releasing synopses after grand jury meetings.

Quote of the night: “I think we should look for every opportunity we can not to call the police.”

Eliminate cash bail? Yes. “Whether or not you have any money,” he says, “should have no bearing whatsoever (on incarceration).”

Decriminalize sex work? No, but says he has no interest in prosecuting voluntary sex workers.

Leave the Oregon District Attorneys Association? Yes, he says, noting that D.A. Mike Schrunk was not a member. “My focus would be on what’s right for Multnomah County.”